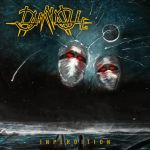 Godz Ov War Productions has announced the resumption of “Inperdition”, the first studio LP of the now defunct DAMNABLE. DAMNABLE was established in 1992 in Przysucha. The group consisted of Yehowy on vocals, Melon on drums, Andy on guitar and Clans on bass. The latter soon switched to guitar, which resulted in the addition of bassist Rolly to the formation. In 1994, a few months before entering the studio, Yehovy left the band – Bayn took the place behind the microphone, with whom DAMNABLE recorded their debut demo, entitled “Obsession Pain”. In early 1996, Clans left the formation. As a quartet, they recorded their first LP, entitled “Inperdition”. In Poland, the album was released only on cassette, in co-operation with Immortal Records. Two years later, the Italian Cryptic Soul Production released that on a CD. In the following years, DAMNABLE released several splits, while Melon left the band. The second and last full-length of the group, “Completely Devoted” saw the light of day in 2001. DAMNABLE broke up in early 2004 when Rolly and Bayn decided to end their musical careers. Pretty short but intriguing history they have and now, all those of us that are unaware, have the opportunity to experience a hidden relic from the depth of Polish antiquity. The first thing that catches the eye is the album cover, which was created by Dagmara Pakos. Its cosmogenic nature arouses anxiety and attracts attention. Then, at the first listening session, attention is drawn to the twisted sound of the album. The disc was surely created in an analog system and devoid of digitization. So, the brutality, precision and ingenuity all that combined here, can be heard in its organic form. Bayn’s vocal is enough to devastate the hearing, where low murmurs are enriched with chaotic screams and more legible growls. The vocals work fully with the massed sound of the guitars, the weight of the riffs and the thick drum parts. Bewildering solos, appearing from time to time, not too long, not too short, but performed very well and stayed for long. Less than 25 min running time, may sound short but totally appropriate for their style of playing. The album’s arrangements with intro and outro (a mysterious one) made the whole listening experience a reflective one and the introspective lyrics gave the whole album a mystic charm despite the uncompromising insanity. Sounds questionable in this genre! However, upon listening to ‘Paranormal Verdict’, ‘Circle Of Time’, ‘The Myth’, ‘Reincarnation’, ‘Re-Reincarnation’, ‘To A God Unknown’, ‘Self Analysis’, it’s hard to deny. Altogether, this re-issue can be a fascinating surprise for any newly exposed listeners, and will again impose that, finest albums were made in the 90s, at least in terms of creating and developing genres. Explore more about the band and label here: www.facebook.com/damnable-177696212409198, www.godzovwar.com.