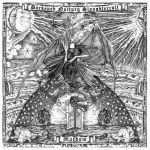 Just so you know, vocalist Onielar screeches the lyrics like a hellspawn succubus about to devour her prey on the last edges of twilight before Earth is enveloped by the fires of Hades. Goddamn, this girl can fucking scream. But that comes as no surprise to any followers of DARKENED NOCTURN SLAUGHTERCULT, who have been wreaking havoc since their first demo in 1999. And she fucking killed it on BETHLEHEM’s self-titled album three years ago. With both a new DARKENED NOCTURN SLAUGHTERCULT and BETHLEHEM album out around the same time, it’s apparent she isn’t resting on her laurels. But let’s not forget Velnias (guitars), Adversarius (bass) and Horrn (drums) who hold the blasphemy all together in one misanthropic group of lost souls. Six years after 2013’s scorcher "Necrovision", the band returns with "Mardom", easily an album you can return to on heavy rotation without growing tired of the angst and lightning-strikes of utter turmoil. After a brief intro of ‘Inception Of Atemporal Transition’, the band kicks it into gear with a bloody swath of Black Metal domination in ‘Mardom-Echo Zmory’. The conquering drums parlay with the acid-fueled guitars and bile-curdling vocals to drench us in the futile wall of blaring sound. ‘A Sweven Most Devout’ doesn’t give you time to catch your breath before shattering your carcass into a million bloody pieces. DARKENED NOCTURN SLAUGHTERCULT never fails to deliver a chaotic, aggressive sound that stays with you long after the album ends. ‘T.O.W.D.A.T.H.A.B.T.E’ is another blitzkrieg of guitars and high-pitched vocals that leads into ‘mid-tempo ‘A Beseechment Twofold’ that’s still harsh and thundering even while not rushing at breakneck speeds. ‘Exaudi Domine’, however, takes off like a panther on fire. Between the destruction of ‘The Boundless Beast’ with its crushing bassline, the monolithic ‘Imperishable Soulless Gown’ and final track ‘The Sphere’, DARKENED NOCTURN SLAUGHTERCULT crushes the masses in a whirlwind of blistering riffs and blasting drums. If you want an album that grabs you by the balls (or ovaries) and doesn’t let go until the end, then "Mardom" is for you. This isn’t for the weak, my friends. Onielar stomps her spiked boot on the necks of any male who thinks a woman can’t kick ass in a Black Metal band. She’ll eat your fucking soul and shit it down your throat while laughing the whole time. For more info, check out www.slaughtercult.de, www.war-anthem.de