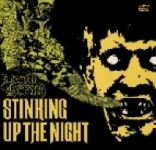 Former NIHILIST / ENTOMBED drummer and current HELLACOPTERS member Nicke Anderson re-discovered his love for old school Death Metal and as a result returned to the underground scene with a new band called DEATH BREATH. This three-piece got together in 1995 and next to Nicke (on guitars and drums) features Robert Pehrsson (guitars / vocals) and Mange Hedquist (bass). Their debut full length album “Stinking Up The Night” quickly secured them a deal with Black Lodge Records in Europe and Relapse in the US, who both will release the impressive ten tracker on September 22 and October 17 respectively. Listening to the material I can only say that this is surely a must have for all those of you who really miss the early days of the extreme underground, and with that I mean the time way before digital recordings, the internet and top notch productions. The DEATH BREATH song material perfectly fits into a period when tapetrading and xeroxed fanzines were still responsible for the status of a new band, as opposed to mainstream labels with their full colour advertising campaigns and technically perfect, yet faceless products. Even though the band itself mentions quite a lot of influences on their official website, I personally discovered elements of three acts in particular, that their songwriting seems to be based upon: AUTOPSY, REPULSION and early MANTAS / DEATH. The cool thing is that they managed to talk REPULSION’s vocalist / bassist Scott Carlson into contributing vocals to three of the songs on “Stinking Up The Night”. Considering the fact that REPULSION has always been a big influence on Nicke and the other guys in NIHILIST / ENTOMBED this must have been a dream come true for him. There’s also three more tunes to feature the voice of Jörgen Sandström (the original GRAVE vocalist) and one that has “back-up screams” by DISMEMBER’s Fred Estby. But the album still doesn’t sound like a compilation of different styles because of that, it’s actually quite cool to hear how much they all seem to share a similar vision on here. The bottom line is always very raw, very straight ahead and right into your face! If you like the aformentioned bands or most recently freaked out on the discs by MURDER SQUAD or MAUSOLEUM, make sure to give this a listen as well. It’s very cool stuff and you’re gonna love it for sure!! By the way, prior to the release of the album DEATH BREATH has already released a 7″, which features two non album tracks (‘Corpses Of Death’ and ‘Matricide’) next to the album opener ‘Death Breath’ (just in case you need a copy of that as well)… For all more info check out www.deathbreath.se or www.myspace.com/deathbreathdeathmetal