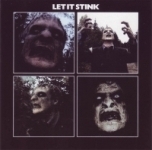 Sweden’s old school maniacs DEATH BREATH seem to be pretty fast and highly motivated songwriters at the moment. Shortly after their awesome debut full length "Stinking Up The Night" (which reared its ugly head by the end of 2006) and the self-titled "Death Breath" 2-track 7" EP (which was set free in early 2007) they are already spitting out their next release. This time it’s the MCD "Let It Stink", which features four brand new songs, three covers and a little zombie video for the song ‘Death Breath’ in two different versions (one in b/w with DEATH BREATH music to it and one in color with a horror movie score backing it up). The interesting thing about "Let It Stink" (apart from the cover art, which is an extremely cool zombie parody of the BEATLES’ "Let It Be" record) is, that the material fits together extremely well, even though it partly comes from a different musical background. Of course there’s the typical DEATH BREATH tunes, that totally shred in the usual way, but then there’s also equally convincing cover tunes of BATHORY (‘Sacrifice’), G.B.H. (‘Lycantrophy’, feat. REPULSION’s Scott Carlson on vocals again) and DISCHARGE (‘Maimed And Slaughtered’). I honestly didn’t really expect that to work out, but surprisingly it does very well! DEATH BREATH combine the best of both worlds here (old school Hardcore and Metal that is), and all that even without sounding like a stupid Crossover act. Every song hits you like a hammer due to its high energy level, the uncompromising rawness that the guys managed to capture in the studio and the overall 100% pure live feeling of the whole disc! Next to the already wellknown triumvirate (Nicke, Robert and Scott) there’s also a contribution from SERPENT OBSCENE’s Erik Sahlström this time, who guests as a vocalist on ‘Twisted In Distaste’. So, all in all another "must have" for fans of the band and old school Metalheads in general. For all further info check out the band’s official website www.deathbreath.se or www.myspace.com/deathbreathdeathmetal.