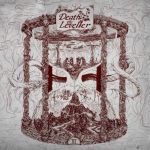 Here’s something for all those who love to travel into the depths of sorrow and back. DEATH THE LEVELLER hail from the country of Ireland, a place where Doom Metal of the melodic kind such as MOURNING BELOVETH or personal fave THY SINISTER BLOOM (but also more abrasive acts like WRECK OF THE HESPERUS) blooms like madness in the spring. Interestingly enough, “II” is actually their very first full-length album, yet it does sound like the guys have been honing their skills for quite a long time. As a matter of fact, they have: three of them have served with late-90s Folk Doomsters MAEL MÓRDA and even late 80s technical Thrash outfit CURSED EARTH. Anyhow, DEATH THE LEVELLER is originally a poem by XVII century English dramatist James Shirley. The grandiose, tragically figurative mood of the text itself has clearly provided some major inspiration to the band’s sound and imagery. A delayed guitar bending announces the beginning of ‘The Hunt Eternal’ and the stage is set. It’s really hard to compare Denis Dowling’s vocals to other vocalists in the Doom Metal realm as sometimes he sounds to me like a grieving version of Eddie Vedder. I know, it’s weird, but rest assured Dowling’s tone sits just perfectly with DEATH THE LEVELLER’s highly consonant brand of slow Metal. I must admit I’m not really into this specific twist of the genre, but Cruz Del Sur frequent buyers and worldwide melo Doomsters won’t be disappointed at all. Check their moves at www.facebook.com/deaththelevellerdoom and at their label’s own website, www.cruzdelsurmusic.com.