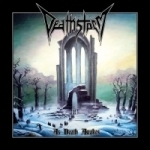 Austrian old school Thrashers DEATHSTORM that used to be called DAMAGE in 2007 – 2010 after the name change, have now got their debut full-length studio album, titled "As Death Awakes". What we have here, is a package of 8 blistering, fast and furious Thrash Metal songs that clearly hark back to the times when bands like SADUS, KREATOR, SLAYER, MORBID SAINT, VIOLATOR and such – with more vicious and evil sounds, were first putting their noises together, and just trying to convince the whole world about being by far the fastest and most kick-ass Thrash Metal act that the world had ever seen. Well, at that sincere attempt this Austrian trio DEATHSTORM does a pretty decent job indeed, just pushing pedal to the metal in every curve they make, without caring much of consequences at all. The band is loaded with such good energy levels that really allow them to climb on the back of storm – and sweep this bunch straight on our necks, for our immediate pain and pleasure, I guess. This is how Thrash Metal used to sound some twenty-or-so years ago, when Thrash Metal was meant to be violent, hostile and totally ripping, saving no one’s ears. Even the album’s somewhat raw and unpolished production serves DEATHSTORM’s every attempt well to be considered old school Thrash to the core. Even without that ultimate ‘wow!’ element involved with this release though, DEATHSTORM does all that what they are originally meant to do with "As Death Awakes": serve us with some uncompromising and punishing Thrash Metal fun. Nice fuckin’ work, fellows! For further info about DEATHSTORM, simply go to: www.myspace.com/damagewebsite, label: www.ihate.se