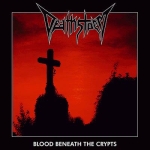 When the Austrian DEATHSTORM started in 2007 under the name DAMAGE, the signs weren’t set for Thrash Metal. Two demos and a name change in 2010 later, persistence started to pay off. I Hate Records took charge of DEATHSTORM and released the EP “Storming With Menace” and a full length album, “As Death Awakens”. Since then, the three piece grew into a quartet with the addition of second guitar player Steindl alongside with Ferl and another vinyl-only EP was unleashed, a 10” called “The Gallows EP”. Meanwhile it’s the year 2016, High Roller is the new recording home of DEATHSTORM and “Blood Beneath The Crypts” is the second full length of the band. So, there will be no real chance to escape the ferocious Austrian Thrash attack. And no acceptable reason either, unless you hate Thrash Metal. Just take the opening ‘Deathblow’ – this one starts off with a grooving part that somehow reminds of the first offering of the mighty SACRED REICH, before it turns into a riff massacre at its finest. The hectic ‘Splendid Mutilation’ comes along pretty blackened, fitting to bass player Macs raucous vocals. ‘Murder Of A Faceless Victim’ is very diversified in speed, while ‘Immortalized Sinner’ gets the listener clocked. The flipside starts off perfectly with ‘I Conquer’. Just take this message for serious! With ‘Enter The Void / Dunwich’, we have an even quite progressive Thrasher here with breaks and a kind of musical schizophrenia. The final double strike of ‘Verdunkeln’ and ‘I Saw The Devil’ ends this Thrashmageddon more than worthy. DEATHSTORM has released one of the definite Thrash highlights of the millennium with “Blood Beneath The Crypts”, so beware! And check them out at: www.facebook.com/pages/deathstorm/1500527186865344. A visit at their label’s site is a worthwhile thing all the way: www.hrrecords.de