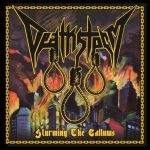 Last year, Austrian Thrashers DEATHSTORM took me by surprise with their second album “Blood Beneath The Crypts”. Not even a year later, “Storming The Gallows” hits the shops. A new album? No, sadly not! But there’s no real reason to be sad about this album for sure, for it compiles two DEATHSTORM EPs that up to now were only available on vinyl. The title is a combination of the original names of the EPs, as is the cover artwork that is done in a very classy way. And all the eight tunes on this disc will make those fall to their knees who already loved the ones on “Blood Beneath The Crypts”. The four songs from “Storming With Menace” (originally released in 2011) are pure old fashioned Thrash fury, raw like a bloody steak, true to the bone and merciless as an army of bloodthirsty Vikings. The production sounds like a forgotten mid-80s debut album of an up and coming European Thrash band, the same goes for the riffs and the rabid vocals. Be it the diversified opener ‘Tales Of The Undead’, the manic ‘Demonic Possession’, the rather grooving ‘Selfworth Extinction’ or the final anthem ‘Prepare For The Slaughter’ – all hits, no miss! And the other four songs of the disc, originally released under the name “The Gallows EP” on 10” vinyl in 2015, are just as fine. The musical direction hasn’t changed one millimetre, the sound is a little more dense but still fuckin’ rough and the energy level is still high as the sky! Maybe DEATHSTORM have become a little bit more mature in the four years between the two mini albums, but that is not one little bit alarming. Listen to the opener ‘Consummate Horror’ or ‘From Oblivion’, and you’ll understand that there’s no need to worry. And the other two tracks ‘Burial Ritual’ and the shout-along ‘Massgrave’ are maybe the best songs on “Storming The Gallows”. But it doesn’t really make sense to find the highlights of a record that’s a highlight itself for any Thrasher. So visit: www.facebook.com/pages/deathstorm/1500527186865344 or www.ihate.se