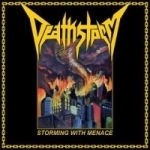 It is not often that I come across new Austrian bands to be honest. Though now DEATHSTORM have materialized themselves in front of me with their aggressive and hard hitting 12" EP "Storming With Menace". While DEATHSTORM might be a brand new moniker, the band have roamed the underground for a few years as DAMAGE, a band that released a couple of demos before morphing into DEATHSTORM. The Austrians are attacking us with a blitzkrieg of thrashing riffs, pounding rhythms and aggressive vocals – visciously inspired by old European Thrash Metal and the wave of grim, dark and raw Norwegian Thrash Metal lead by AURA NOIR and NOCTURNAL BREED in the late 90s and mid 00s. An inferno of hooking guitar riffs and raw melodic ripping leads, blend in and out of the backbone of the balanced to intense drumming and noisy bass lines. Raw is a trademark for "Storming With Menace" a raw recording of raw and intense music with the right energetic and ripping feel. This doesn’t feel like a recording from 2011, more like one from the start to mid-nineties, I like that. A riff here and there might sound familiar, like parts of the compositions, though that doesn’t take away the energy and the intensity, and the fact that DEATHSTORM in a few years will become a damn good band. Right now they are kicking it hard with their thrashing maniacal attack on our senses and urge us to throw back a few beers and party hard – damn I think it is a killer live act, looking forward to catch them one day – a fresh breath on the European Thrash Metal scene with their heavy and melodic parts, their shredding and well done leads, the blasting aggressiveness and all out headbangable and soulful Metal! More info at www.myspace.com/damagewebsite, www.ihate.se