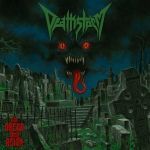 Dying Victims Productions is a small record label from Germany focusing on varieties of eighties Metal – Speed, Thrash and first wave Black & Death Metal. So it is hardly surprising that DEATHSTORM are influenced by early KREATOR and the whole bunch of bands that can be subsumed under the label German / Teutonic Thrash Metal. Somewhere I have read the newly coined name KREASTRUCODOM, still contemplating if that recreation is amusing or not. Even though DEATHSTORM are not a clone of mentioned bands, instead they manage to sprinkle some Death Metal riffs into the nine songs. Accordingly the songs are shorter, more punchy and regarding the song-structure not too complicated. No intro or outro, but a short interlude called ‘The Mourning’. By the way, DEATHSTORM are not from Germany but from Austria and “For Dread Shall Reign” is already full-length number four. Additionally two EPs and one split EP with TERRORAMA, but you never get the feeling of listening to an established band tending towards mainstream. Instead the trio still unleashes the energy of a bunch of young people aggressively battering their instruments with no remorse. This feeling is supported by the old-fashioned sound. Just a bit above the level of a rehearsal room recording or demo tape. Personally I think getting such a sound is more complicated then a high-polished production. All Thrash Metal fans should visit www.facebook.com/deathstormthrash and everyone generally interested in eighties Metal should take a look at the label here www.facebook.com/dyingvictimsproductions