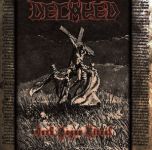 This is a compilation form the long running Portuguese old school Black Metal band DECAYED. Originally released as a double CD-R a few years ago, this is a remastered version in one CD (the other CD on the previous version were some live songs). Basically consisting of songs from other compilations, and some covers like SEPULTURA’s ‘Troops Of Doom’. DECAYED’s style has not changed that much within the pass of time, they stick to an old school sound near to that of BATHORY with some references to early SARCOFAGO, and a couple of things reminiscent to SAMAEL although in a faster tempo. Interesting enough all of the songs have a quite good recording quality and the same guitar tone, thus it sounds more like a full length rather than a compilation. If you have heard them before, then you know what to expect. For some DECAYED might sound too simple, raw and similar sounding between songs. Well, yes, that is right. But then for some others, if it is not broken why the hell to fix it? In this case, DECAYED is like an old Rock’n’Roll band sticking to their sound. They have even released a new album (with no other but mighty Tormentor from DESASTER / ASPHYX fame on drums) and it is exactly the same style, the same guitar tone and the same raspy vocals, with riffs that seems to be familiar. And yet that is the charming of some bands. To stay quite true to their essence with minimal changes or evolution. More info at: www.facebook.com/dkd666, www.facebook.com/ibdc666