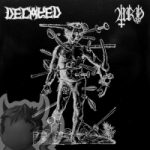 Pretty different acts united their forces on this split album: Portugal’s straight Black Metallers DECAYED, who finally appear with a human drummer (Tormentor of DESASTER fame) after releasing numerous works with a computerized one and Finnish Black / Death / Thrashers URN, who have released only one album so far and remain an insider tip in the underground scene. Musically DECAYED have the better production and one can hear the experience the band has earned over the years, the two new songs and the well done cover of ‘Welcome To Hell’ are among the best the band has ever recorded, driving Black Metal with lots of energy and a certain dose of traditional Metal power. Definitely not something done for the first time, but still pretty cool. Only the keyboard interludes between the songs accounting for over 7 minutes could have been replaced by one or two "real" songs, at least in my opinion. Personally I have completely missed URN, although I guess I have to look for their debut "666 Megatons" (2002, Damnation Records) now! If it is of the same raw intensity and offers comparable violent Black / Death than "Morbid Death", than it should be a must-buy!!! URN sound almost close to War Metal à la old DESTROYER 666, BESTIAL WARLUST with a little more structure and a perfect rehearsal / demo sound that just kills. Evil, aggressive, as catchy and primitive as old NUNSLAUGHTER mixed with the Australian aggressors mentioned above, just great!!! I’ve read reviews on this release favouring the DECAYED side, especially because of the better production, but URN are the real winners of this match and their six songs make me yearn for more, much more! Links of interest: www.iron-pegasus.com, www.come.to/decayed