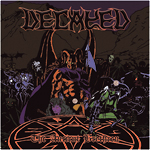 When the silence after the nuclear strike hits, when all on earth has withered and decayed, only the sound of cockroaches and DEACYED will sound, the Portuguese will keep on delivering their sonic torture, as they have done since 1990, nothing will ever change that! It will be be a big fat lie to say much has changed since the band’s first full length "The Conjuration Of The Southern Circle", which was released back in 1993. If you put on that record and right after, the band’s newest full length offering "The Ancient Brethren" you’ll get the same dirty and raw Black Metal straight to your face. I’ve never been much into DECAYED, I’ve enjoyed a tune here and there, though a whole album soon becomes a bit to repetitive for my taste, though the fellas do deliver some stable Black Metal with a good touch of Death Metal, especially the dark churning atmosphere puts a gloomy light over the material. There are some good classic riffing, some nice guitar leads, which could make a lot of newer Heavy Metal bands come alive and some quite good drumming, together with the nice and haunted vocals. An enjoyable record for a spin or two, though it soon becomes a tad too much of the same, a few tracks less wouldn’t have hurt the output, as it, in the end crumbles into one evil black mass. You know what you get when putting on a DECAYED album and that’s for such quite cool, who haven’t cursed a band to heaven, for changing their style or expression from one record to another? If you don’t already know this band, it’s about damn time to get into the game! Get a dose of the madness at: www.facebook.com/dkd666, www.blackseedprod.com