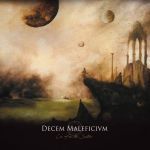 When I threw this album in the player, I knew nothing about the band, besides their name, the album title and the label which released the album. After the first few tracks, I had a clear suggestion about the band being from Norway and perhaps having Simen Hestnæs in the line-up, or in for some vocal duties at least. Then I searched for the band name to get some solid info, and none of my suggestions seemed to be correct. DECEM MALEFICIUM hails from Chile and I don’t think Hestnæs has any bonds to the band. The Chileans seem to have listened to their deal of Norwegian Metal music, as I find a great assemblage of THORNS, BORKNAGAR, ARCTURUS and DIMMU BORGIR and a few others thrown into the mix. It is actually blended quite well, there are a lot of great hooking melodic parts, some grandiose atmospheric moments, coldness, moments straying from the safe path and an overall good flow to the music. Musically the album is well written and – delivered, there are some great parts and music among the tunes, though it is like it all has been heard before during the late 90s and 00s. Not that it is necessarily a bad thing, though sometimes it sounds a tad too much like a band or their songs, as track 6 ‘Denial Tragedy’ which becomes very much DØDHEIMSGARD. Again not a bad thing, though they already did it. There are some great nostalgic moments on “La Fin De Satán” and quite funny to puzzle the inspirations of DECEM MALEFICIUM together. That written the album is not bad at all, a look back to the, perhaps, a tad forgotten great and interesting period of experimenting Norwegian Black Metal and some things beyond. And as it sounds, great musicians, fine production and hell of a vocal prestation! Enter the word playground deceit: www.facebook.com/decemmaleficivm, www.lesacteursdelombre.net