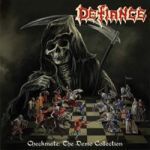 DEFIANCE is one of the many Thrash acts that was born in the mighty eighties in the US. Hailing from Oakland, California, DEFIANCE was often compared with other classic acts as TESTAMENT, FORBIDDEN and so on. This 2 CD compilation titled “Checkmate: The Demo Collection,” released by Vic Records last year, features almost all their demo material released between 1986 and 1994 (the “Demolition” demo from 1988 seems not to be here). The first CD contains tracks from a previously unreleased material – as their “The Jackson Street Sessions 1989” – and some already known stuff like the “Hypothermia” demo from 1988. Here you will find an unreleased track from 1991 and other unreleased stuff from 1989 as well. Everything here is very consistent in style and composition, but it’s hard to believe that the best stuff belongs to the unreleased material from 1989 (probably a pre-production demo). Tracks like ‘Violent Remedy (Void Terra Firma)’ or ‘Skitz-Illusions’ are fucking great (both appeared later in the second DEFIANCE full-length “Void Terra Firma,” from 1990). The music here reminds me a lot of TESTAMENT’s “The Legacy,” especially the vocals department. The rest belongs to the “Hypothermia” demo. Good Bay Area Thrash style material. Some tracks from that era appeared later on the DEFIANCE album debut, “Product Of Society” (1989). The CD 2 contains stuff from 1986, probably the earliest track the band has ever recorded, 1987, 1989 and 1994. Here you will find an instrumental version of the classic track ‘Hypothermia’. Tracks 4 to 8 come from a live show that took place in Oakland in 1989. The production is good enough, and it gives you a clue about this classic act live on the stage. ‘Checkmate / Lockjaw’, ‘Tribulation’ and ‘Product Of Society’ were performed, among others. The last three tracks are part of a 1994 demo. The music here is dramatically different from the other stuff contained in this compilation. The music is way slower, and it sounds like a mix of FORBIDDEN (“Distortion” era) and SACRED REICH (“Heal” era): modern and tedious stuff, a testament of those critical post Thrash years. After hearing this good compilation, I can tell you one thing: the best stuff this band has ever done is their third album from 1992, “Beyond Recognition” (it should be re-released once again). This compilation is just for loyal DEFIANCE followers, nothing more, nothing less. The good news is (in case you did not know): DEFIANCE is active again, and you can follow them on social media at www.facebook.com/defiance-official-119964101377530. How to get a copy? Go straight to the Vic Records website at www.vicrecords.com.