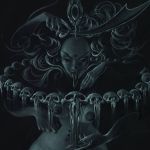 Belgium’s DÉHÀ is a busy, busy man. As of this album, the guy’s been in 48 bands that I counted. Forty-Eight. F-O-R-T-Y E-I-G-H-T. And that’s not all. As of 2022’s “Decadanse”, the artist (under his own name Déhà alone) has had 42 releases since 2018. Forty-Two. F-O-R-T-Y T-W-O. That’s not counting the other 47 bands he’s been involved with. How in god’s name does he have the time for all of this? Does he even eat or sleep? And with all his releases, you’d expect them to be half-assed attempts at songwriting and recording. But surprisingly that’s not the case. Hell, I wasn’t even aware DÉHÀ was just one guy until I looked it up. With just two tracks clocked at around 45 minutes, Déhà gives his music time to breathe. This isn’t Varg Vikernes deciding to release repetitive Folk records, dragging out the songs in never-changing redundancy to take up space. Both songs on “Decadanse” are ever-evolving, constantly veering right and left, and keeping it fresh and amorphous throughout. ‘The Devil’s Science’ has little keyboards before the doom sets in. Whispery vocals linger in the background until anguished screams reverberate for a good while. And then the regurgitating, throaty vocals kick in that almost sounds like a devilish muppet. And is there a hint of electronic drums seeping into the mix? This sound morphs into something else so many times that it really starts to hit its stride, climbing higher and higher, with more vitality to it. The music speeds up, slows down, speeds up again in a crescendo of epic peaks. This isn’t just some dude sitting in front of a laptop in his bedroom throwing out random, simple riffs. There’s actual thought put into it. For an artist with so many fucking releases, I’ll have to say it’s quite impressive that there’s enough substance and variety to his Metal. And then there’s the other track ‘I Am The Dead’, a slowburn of a song that takes a while to get going with its atmosphere and plodding guitars. Around four minutes, it starts to coalesce, to grow, to alter its structure. The constant changes keep you guessing as to where it’ll all end up. Where it ends up isn’t where it began. Any by damn, that’s a fucking journey. So when you imagine one guy being involved with 48 bands, and 42 releases by only one of those bands, and two long-ass tracks of ever-changing riffs and song structure, then by god, that’s just goddamn fucking impressive. For more info, check out www.facebook.com/dehamusic, www.facebook.com/ladloproductions