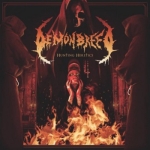 The end of LAY DOWN ROTTEN in 2015 marked the beginning of DEMONBREED. Drummer Timo and singer Jost were joined by some CARNAL GHOULs on four and six strings and started DEMONBREED. Their debut album “Where Gods Come To Die”, released a good year later, already received some good reviews with justice. Now they are back with some new material, yet “Hunting Heretics” is only an EP with five new songs. But this little flaw doesn’t negate the fact that the new DEMONBREED stuff will be a feast for anyone into good old-fashioned Death Metal of the European school, spiced with some Boss-HM2 sound and added groove. From the first notes of ‘Fear The Verdict’ to the last chords of the title track, DEMONBREED deliver fine headbanging songs for all those Death Metal lunatics out there. Nothing more, nothing less! In other words: this is another really good Death Metal record that I absolutely appreciate without being able to say why. If you can’t get enough of good Death Metal, check www.facebook.com/demonbreedofficial or visit www.facebook.com/testimonyrecords