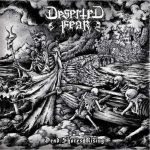 The guys from up-and-coming German Death Metal act DESERTED FEAR are on the march. After two albums for the gold digging label F.D.A. Records, they took the next step in their career and signed a deal with Century Media. Now their recording home is not only one of the most important companies in the glory old times of Death Metal, but also a label big enough to give the guys a push. As far as the qualities the band showed on the first two albums are concerned, they deserved it! Now “Dead Shores Rising” is here, the first result of this collaboration. And it proves that DESERTED FEAR are on the way to reach the spheres of a band like AMON AMARTH. Just like them, DESERTED FEAR have a feeling for writing songs that both appeal to Metalheads not really into Death Metal and don’t deny the roots of the band. From the first riffs of the grooving opener ‘The Fall Of Leaden Skies’ onwards, “Dead Shores Rising” shows the next step of evolution since the 2014 album “Kingdom Of Worms”. The songs are more light-footed, catchier and more melodic, leading the sound of DESERTED FEAR closer to the primal sound of the Gothenburg school. Just listen to songs like ‘Corrosion Of Souls’ with its IN FLAMES styled melody lines or ‘The Carnage’ that reminds me of old DARK TRANQUILLITY. But there are also other ideas that can be found on “Dead Shores Rising”. ‘Face Our Destiny’ for example has some moments that are near to Gothic inspired Doom / Death Metal, as far as harmonies and atmosphere are concerned, and comes along with classic Metal guitar harmonies in the end. And the last official song ‘Carry On’ (thankfully not a cover of an unbearable song) underlines the qualities in epic songwriting DESERTED FEAR already showed before. But the band hasn’t forgotten those mainly fast forward tracks like ‘The Edge Of Insanity’, ‘Open Their Gates’ with a nearly hypnotizing lead guitar or ‘Towards Humanity’ with a fine mid tempo interlude. All in all, DESERTED FEAR created a pretty diversified album that has the potential to become some kind of genre smash hit album. That might not please any aficionado of the Death Metal genre, but at least I will surely give this album a few more spins for sure. The early birds that get the digipak CD will get the pleasure of two bonus tracks, ‘A Morbid Vision’ and ‘The Path Of Sorrow’ (the latter featuring Tompa from AT THE GATES on guest vocals – Frank), that are more in the vein of older DESERTED FEAR songs, yet can’t completely keep the level of the album. But this tiny flaw should not discourage you from checking www.facebook.com/desertedfear before the guys become the next big thing. And for the label, go to: www.centurymedia.com