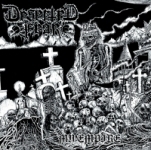 Once upon a time, there were three young buddies in a town in Thuringia, Germany. They thought about the town they are from, translated its name and recognized that they had to start a real brutal Death Metal band… The name of the town is Eisenberg, in English it translates Iron Mountain, and the name of the band is DESERTED FEAR. After two years in the rehearsal room, they recorded a demo, started to play live and now, two more years later, they’re here to crush us all with their first album "My Empire". And what a wonderful debut album it is! 42 minutes of Death Metal, the old, continental European school, with no compromises and no remorse. The intro let the horns of ‘The Lord Of The Rings’ sound before DESERTED FEAR start off with an opener ASPHYX would be proud of. ‘The Battalion Of Insanities’ rips like it is 1991 again and delivers nothing but pure joy of brutality. And it features a fine blend of midtempo grooves and blast parts, characterizing the direction the album takes. Be it ‘Pestilental’, ‘The Black Incantation’ or ‘Field Of Death’, every song is a smash in the face. And to my joy, DESERTED FEAR don’t forget to include one or two melodies and harmonies, and they also don’t forget that lead guitars are made to refine the style. Just listen to the title track (my fave on the album) and you know what I mean. To close the album, DESERTED FEAR chose a midtempo riff-monster and called it ‘Bury Your Dead’, which fits to the song’s atmosphere perfectly, before the horns sound again. Again, we neither have the reinvention of the wheel here, nor of the steel, but we have damn great old school Death Metal. Nothing more, nothing less, and that’s very good. For those, who still love the sound of their youth or missed the glory days of old, because they were too young, it should be inevitable to check out "My Empire". Look at: www.facebook.com/desertedfear (you can listen to the opener here) or go to: www.fda-records.com to find out more.