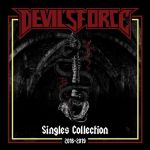 I am not the only one who misses the good old days! Pierre Törnkvist, the man behind the Swedish assault machine DEVIL’S FORCE, does also seem to have a sweet spot for the good old days, when Heavy Metal, Black Metal and Thrash Metal all were merged into one powerful unit. The band has been around since 2016 and has released 7 digital singles and one demo (which includes 3 of the digital single tracks – Frank). We get all singles here, including the cover version of BATHORY’s ‘War’, which is a damn good track and delivered quite well by DEVIL’S FORCE, probably one of the bigger inspirations for the band. Though the rest of the tracks do good, if you get a kick out of black thrashing madness! Thrash, Black, Heavy Metal from long before everything went trendy and quite boring, that is how DEVIL’S FORCE sounds. Nostalgic, intense, straight to the bone with a great overall dark atmosphere and punch, great guitar work and hooking songwriting – and those vocals are quite good, my friends! Join the force and enter the conspiracy with Satan at www.facebook.com/devilsforce. Label contact: www.facebook.com/ironfistproductions1