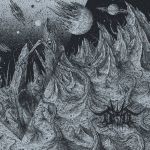 DEVOID OF THOUGHT are an Italian Death Metal band that has put out their first full length album “Outer World Graves” on Everlasting Spew Records. At 40 minutes, the band offers plenty of awesome Death Metal moments. Kick starting with ‘Perennial Dream’ the band embraces a very atmospheric technical approach to their music. The guitars take the centre stage and guide the song through a delicate approach to riffing. This is good sci-fi Death Metal! The opening riffs of track # 2, ‘Four Cerulean Ways’, take me to DEMILICH’s ‘The Echo’, the band builds up momentum, then immediately breaks it to have a slow passage to let sink in the heaviness of the message. On the whole the riffs are a mix of some new thoughts and established approaches, however, I really like the sound of the guitars on this album. Sci-fi Death Metal has existed since TIMEGHOUL and although DEVOID OF THOUGHT pretty much follows the footsteps of the greats, they offer a good glimpse of what’s going on in Italy. Track # 3, ‘Effigies Of A Distant Planet’ is the longest track of the album at 11:20 and although it opens with a phenomenal barrage of riffs, it hits a plateau and stays there for a while. The quality of execution isn’t at question here, DEVOID OF THOUGHT sure provide ample evidence for that but an endeavour of eleven minutes long such as this could use a harder punch to the gut. That would’ve simply elevated this album to a notch higher because from the beginning of track #3, all tracks run more than 8 minutes. Kudos to the band for giving it a go and doing their best, it certainly shows. I suppose, on the whole, this is a good debut full length, masterfully mixed and produced with the band putting their best vision forward. I like it, the endless riff attack, the atmospheric radiance, the pure execution machine that this band is! Good one. For more information please visit: www.facebook.com/devoidofthought666, www.facebook.com/everlastingspew