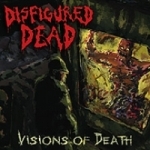 Right now, all lovers of orthodox old school Death Metal can hardly complain about not getting enough high quality morbid tunes every month as the genre is currently at a peak of productiveness. With DISFIGURED DEAD’s “Visions Of Death” renowned label Hells Headbangers now presents the debut album of another classy act in this field that should especially appeal to all fans of early Death, Autopsy’s “Severed Survival” or Repulsion. Of course, one can always argue about the fact if it is still necessary to deliver such anachronistic material that hardly ever is able to live up to the classic albums of the 80s / 90s, but I think it is always better young acts try to replicate the old school than put on their baseball caps and create sonic abominations in the Deathcore vein. DISFIGURED DEAD are 110% old school, be it the cover, the simple riff and song structures, the raspy vocals, the natural production, and overall funereal atmosphere. With ‘Beyond The Darkness’, ‘The Gates Of Hell’ or the excellent ‘Possessed Dead’ the album contains a bunch of highly infective and effective Death Metal “hits”. Unfortunately, DISFIGURED DEAD are not capable of keeping this level of flawless songwriting over the entire 50 minutes of the album, which suffers from a few dull tunes as well. However, considering the fact that this is just a debut, “Visions Of Death” marks a great start and I hope the band works on its (de)compositional skills to delight Death Metal freaks like me with an even stronger record. These guys can do it, I’m sure… www.myspace.com/disfigureddeaddeathmetal, www.hellsheadbangers.com