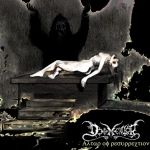 German DOOMENTOR is a quite strange size, a raging display of madness displayed within forms of Epic Doom Metal, Death / Doom, Heavy Metal and Black Metal, atmospheric dark pieces of melancholy, coldness and evil. I bumped into the band, when they released their second album “Opus Diabolie” in 2018, which is a more direct and brutal assault than the new album, much more Black Metal infused and “Scandinavian” in its expression. “Altar Of Ressurection” is more profound and shows a band that has found their direction. The music is heavier with a heavy epic feel to it. Both the Epic Doom and Death / Doom parts are hitting stronger, and the Black Metal parts, when used, giving a nice spice and stir of emotion. It is a quite good album these four guys have made, it has been rocking hard here, since I received it, and I reckon it’ll continue do to so. There is some good stirring in the pot, as we get some good Epic Doom parts with great emotion, eerie and dunkel Death / Doom and faster paced melodic Black Metal with a punch. And the quite distinct vocal, does good in all parts of the music, quite impressive as it is varied a good deal. Doom over the world: www.facebook.com/doomentorcoven, https://doomentor.bandcamp.com