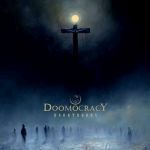 Greece has been making a name for itself in the epic / traditional Doom Metal scene for a number of years now, with bands such as THE TEMPLE and todays review subjects DOOMOCRACY, who already have two full length albums under their collective musical belt, and have released what is undoubtedly one of the finest Doom albums of this year in the shape of “Unorthodox”, making names for themselves in the wider Doom Metal scene. There’s a lot going on within this album and you are taken on an epic musical journey through various soundscapes, through valleys of slow moving riffage and doomed distortion and over peaks of more uptempo dark passages, which can best be described as Power Doom, where the sonic worlds of progressive Power Metal and epic traditional Doom Metal collide head on and explode into an incendiary mix. The vocals of Michael Stavrakakis especially straddling both genres with his impressive high end wailing. He has a powerful, yet emotive voice and uses it to full effect soaring over the crunching and melodious riffs and melodies that weave themselves through the fabric of this opus of majestic Heavy Metal. ‘Eternally Lost’ starts off the album with some crunching, but progessive sounding time signatures which caught this writer admittedly by surprise. The production is very clean sounding, which makes sure that each instrument cuts through the mix perfectly and makes for a very refined listening experience. There’s a good use of keys in this track too, not overpowering, but they add a certain atmospheric quality when utilised. “Unorthodox” is definitely an appropriate title, as this is definitely not your standard straight forward Doom album, although the band’s musical roots and foundations clearly lie firmly in the Doom Metal scene, there is definitely some musical cross pollination going on with the aforementioned Progressive Metal and Power Metal influences making appearances throughout the album. A more progressive CANDLEMASS, SOLITUDE AETURNUS or SORCERER meets a doomier GOTHIC KNIGHTS (an old US Power Metal band) or FATES WARNING definitely springs to mind when listening to this DOOMOCRACY album with the emphasis being on the doomier side of the music spectrum. Prog Doom is definitely a thing and this album would definitely appeal to fans of the above mentioned bands! www.facebook.com/doomocracy, www.facebook.com/noremorserecordsgreece