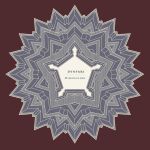 You don’t hear very often of Iceland producing an abundance of Black Metal bands. Sure, there are excellent bands such as THULE, but they’re few and far between. DYNFARI has been around for ten years and have produced five albums, which says alot for their productivity. That’s a consistent amount which keeps the fans listening. Their atmospheric, sometimes solemn, sometimes gothic, sometimes melancholic form of Black Metal seeps into our consciousness like a faint wind sifts through our hair. Their fifth full-length “Myrkurs Er Þörf” is a satisfying album that’ll linger in my mind for quite a while. ‘Dauðans Dimmu Dagar’ is a fog-filled glade emanating a trance-like aura that bleeds into a melodic guitar that grows in its power until an eruption of emotion overtakes the track near the end. ‘Langar Nætur (Í Botnlausum Spíralstiga)’ is a more upbeat, almost alternative Metal sound as the vocals make their first appearance. Johann Orn sounds like a sickly Attila, but manages to traipse and gurgle along with the wall of beautiful sound backing him. Gothy vocals not unlike an 80s Darkwave band mix with the normal Black Metal grunts in ‘Myrkurs Er Þörf’ to evoke a new sound different than most bands out there. The musicians are confident and masters at their instruments. The guitars in ‘Ég Fálma Gegnum Tómið’ glide gracefully while Johann seems to fuss at something. But hey, it works. In ‘Svefnlag’, I’m reminded of a deep cavern dripping with the watery remains seeping through the rocks above. It’s a nice segue into ‘Ég Tortímdi Sjálfum Mér’, a track of murky guitars, plodding drums and gravelly vocals. ‘Peripheral Dreams’ bursts forth after the first 45 seconds with a bludgeoning sound that pounds and beats its way into the swirling depths of the abyss (or something like that). The final track ‘Of Suicide And Redemption’ begins with a bassline that’s joined by epic guitars that lead the way to the climactic end of the album. If you have a substance you like to abuse, abuse it, sit back, crank up the volume and be swept away in the gorgeous music and shrill vocals that’ll mesmerize and hypnotize. For more information, check out www.facebook.com/dynfari, www.code666.net