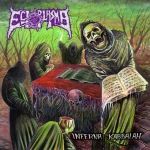 ECTOPLASMA from Greece already has established their name in the Death Metal underground with 3 previous full length albums plus numerous split releases and EPs. They have been delivering muddy, disgusting, old school Death Metal picking their influneces from forefathers of the style from both sides of the ocean and boiling it all down to their rather specific mix. On their fourth full length album “Inferna Kabbalah” it all went a bit sideways. Well, they still churn out old school Death Metal, fear not, but the sound has changed and quite drastically. The drums sound more clean and dare I say mechanized and the overall gritiness and crunch is gone from the guitars. Apparently they went for a fatter, more bassy sounding and cleaner production and for me half the charm is gone. The songs mostly stick from mid to up-tempo and it feels a bit formulaic, there are even some melo death parts which I found very strange and that Finnish Death Metal influence is gone. So I doublecheked and apparently after the last album ECTOPLASMA has lost 3 previous members, leaving only band’s founder Giannis Grimm (vocals / bass) and a new guitarist / drummer Dimitris Sakis to create this “Inferna Kabbalah”. Essentially this is a new band trying to follow the old path and so far the results are dubious. There are some cool, head-banging parts here and there, some catchy riffing, but overall the compositions fail to grab me and throw into insanity pit, they are just on the dull side of things. Check out the links, listen and decide for yourself, if you liked their previous albums, but for the new listener I would suggest their earlier albums. Band info: www.facebook.com/ectoplasma-1579524392276613, record label: www.facebook.com/memento.mori.label