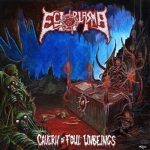 Let’s start this review from the end. "Cavern Of Foul Unbeings", the new album from upcoming Greek Death Metal gods ECTOPLASMA, ends with ‘The Immortals’, a cover of the mighty UNLEASHED, from the classic "Shadows In The Deep". An uptempo Death Metal hymn, not many bands besides UNLEASHED, pull of with such power and everlasting impression, until now with ECTOPLASMA. They have transformed the banger into their own ripping piece of hommage to the mighty Swedes. Though before we get into the frenzy of marching to the underworld, we are getting ten tracks of utterly crushing Death Metal. The Greeks have once again taken their dark skullsplitting Death Metal a notch further and have managed to pull all their inspirations into one mean cocktail of intense Death Metal. A gnarly mix of American and European brutalism, great catchy riffing, pounding rhythm patters and thunderous basslines that follows the base rhythm most of the time, some great guitar leads and killer growls on top of it all. There are great breaks, lots of pace changes, darkness, brutality and sheer skullsplitting. Once in a while it becomes a tad chaotic, which I think suits the output quite well, and at a few times the heavy inspiration from MALEVOLENT CREATION shines heavily through, in both riffing and vocal patterns, though again delivered like this and with this intensity, it is a quie nice hommage. It is not very often I throw around the "Album of the year" term. Though "Cavern Of Foul Unbeings" is a quite tough candidate for the Death Metal title, even though we aren’t that far into 2018, I can’t see who will deliver an album more crunchy, intense and crushing than this. Enter the caverns of the fine art of murder in cold blood: www.facebook.com/ectoplasma-1579524392276613, www.memento-mori.es