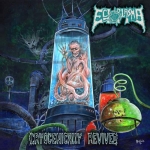 One of my favorite Greek Death Metal bands is back to slay. A new MCD entitled "Cryogenically Revived" has seen the light of day and the band is on fire, as their second full length "Cavern Of Foul Unbeings" was released earlier this year by Memento Mori. This time we are getting an all out attack of old school American Death Metal, a tad more straight on delivery this time, a musical style that had its heyday in the late 90s, and still to this day, works quite well. Mid- to uptempo heavy semi-technical Death Metal in the vein of MONSTROSITY mixed with the gory sickness of AUTOPSY. The boys in the band have an tremendous talent for songwriting, as they pull the tracks off quite well, even though you can hear where they have found their inspiration, they are making the music their own, with their flair for organically progresssions through out the songs, effective riffing, really wellplayed and audible basslines, mesmerizing rhythm patters and a good firm guttural growl. We are getting three new tracks, a re-recording of ‘Through Miasmal Vapours’ from the first album "Spitting Coffins’, where the band was playing a darker and more doomy style of Death Metal with some great threads to the Greek mysticism, channeled by a good deal of the old Death and Black Metal bands from down there. Then we have a quite to the point, though darker, cover version of VADER’s ‘Final Massacre’, a track from the demo days and first album by the Polish Death Metal veterans. Last and not least rehearsal versions of ‘Awakened In The Coffin’ and ‘Human Taxidermy’ from the "Skeletal Lifeforms" mini album released by Repulsive Echo Records and Metal Throne Productions. Yet a highly enjoyable release from Greek’s finest, Death Metal done the way I like it, showcasing great musicianship and flair for the craft, and quite intense outbursts as well, this is a band driven by passion and effort. And it is quite funny to hear how the band is sounding nowadays and then going back in time. A great way to catch the evolution of their music and what the inspirations have been while writing said music! Enter the firestorm: www.facebook.com/pages/ectoplasma/1579524392276613, http://ectoplasma187.bandcamp.com, https://spawnofflesh.bigcartel.com