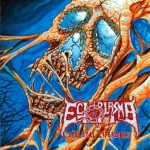 I came across Greek ECTOPLASMA when their demo "Everlasting Deathreign" was reissued by Underground Resistance, and I got hold of it from some obscure Greek label and distro by the name of Repulsive Echo Records. I guess Kostas also dug what he heard from the band, as he now has released an EP with the guys. ECTOPLASMA have also managed to release their debut full length a tad before the EP, on the Polish label Morbid Chapel Records, so do seek "Spitting Coffins" out with piece in mind, and let the unrest rule, a few seconds after you have pressed play. The band is hitting us hard with old school raw and grim Death Metal, noisy slaps of heavy riffing with a doomy feel, disruptive rhythm patterns that either breaks up the harmony or gives the energy a boost. The bass back up the leading and frantic guitar riffing, and makes them even more gnarly and eerie. Eerieness is a keyword here, the guitartone, especially when they hit leads, brings a mysterious and dark atmosphere to the table, and adds yet a layer on the mind-bloggling experience. The vocals are low grunts, growls and deranged muffled screams, again fitting features to this adventure into the realm of paranormal activity and gore. ECTOPLASMA has only moved a little bit since the demo, and that is postive I think, as the demo sums up a lot of the treats I like in Death Metal. They continued the path on "Spitting Coffins", perhaps with a tad more clean sound, though are getting back to a bit more raw and lo-fi production on this EP, which is a sound I think fits the band very well. As we are speaking of AUTOPSY heaviness, OBITUARY simplicity, INCANTATION – like darkness and hellishness, Finnish eeriness and Greek mysticism thrown into a vortex to the netherworlds, hurled up by demons and put on tape. And then they have thrown in a cover version on each release, I dig that as well. They started with ‘Hell Awaits’ by the mighty SLAYER, a version ECTOPLASMA made entirely their own, the track has never seen or felt such darkness. Then we had ‘Pagan Saviour’ by the masters of Death Metal grimness per excellence, AUTOPSY, which they also made their own, even though it is closer to their own style. It is the Finnish swamp-creatures from the deep hidden caves ECTOPLASMA has covered this time around, ‘Towards The Shrouded Infinity’, again a track pulled from one of my favorite albums "Slumber Of Sullen Eyes" by DEMIGOD – again a track made their own, but again a style close to the ECTOPLASMA sound. Follow these lads, they are going to crash some gates sooner than later. Priests of Hades seek the sacred star, join us: www.facebook.com/pages/ectoplasma/1579524392276613, label contact: www.repulsiveecho.com