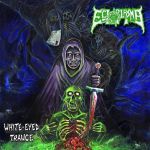 The Greek ECTOPLASMA are around for quite a while now and though I often stumbled over their name and saw their logo, I never heard a single note from them. “Just another new Death Metal band trying to sound like the old heroes”, that was what I thought, “but, hey! The artwork is cool!” Listening to their third album “White-Eyed Trance”, I soon found out that I was pretty right, yet I was wrong either. Pretty confusing, huh? Well, let me explain this a little more detailed. On one hand, ECTOPLASMA are deeply rooted in the old school of Death Metal from the early 1990s. It’s just a fact that can not be denied. But on the other hand, they are far from sticking to a specified style. The Greeks just seemed to have listened to any influential album and nearly all the hidden gems from the golden era of Death, took all these manifold influences and used them to create their own specific interpretation of that era. The result is some fresh, even ageless stuff that could have been recorded any time. In addition, the songwriting is as awesome as the musicality of ECTOPLASMA. And I have rarely heard a clearer production in Death Metal that still sounds rough and brutal. So anyone can hear that the guitar riffs are absolutely crunching, the bass is ultimately pounding and the drums are a real killer. Listen to songs like ‘Eviscerated In The Howling Winds’, ‘Psychomanteum Immolation’, ‘Alucarda, The Daughter Of Darkness’ or their damn fine interpretation of the DEVASTATION tune ‘Souls Of Sacrifice’ for yourself. You’ll soon find out that ECTOPLASMA have released one of the best old school Death Metal albums in years. Visit them at www.facebook.com/ectoplasma-1579524392276613 or go to their label’s site: www.memento-mori.es