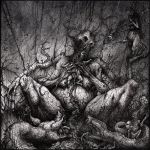 The womb BLASPHEMY once crawled from is still going strong. This time it is EGGS OF GOMORRH, hailing from the French speaking part of Switzerland. Three years after the debut "Rot Prophet" the EP “Outpregnate” is keeping the flame of War Metal alive and burning. And it really burns, after a redundant intro five tracks (including a cover of ‘Domination Xtasy’ by ARKHON INFAUSTUS) are annihilating anything. The devastating power unfolds mainly in up-tempo blasting madness with a vocalist breathing fire and brimstone upon the listener. According to Metal Archives the lyrical themes are Death, Torture and Perversions, that hits the nail on the head. Regarding the guitar work it is not that spectacular, basically the songs are living from the drums and vocals. The songwriting is characteristic for the genre War Metal, with five songs in fifteen minutes it is rather plain and simple. But I guess no one is expecting anything else. What initially aroused my attention was the band’s name. Sound, for my ears, pretty strange and I was not really sure what to expect, a Fun Grind outfit or a serious band. Luckily the latter one. In the band’s own words: "Eggs as in Beginning, the foetus, the birth and Gomorrh and sin and everything which is perverted dead and fucked up. It stands for a monument of hate and disease. Satanic sex and blasphemous torture. The beginning of all that is evil." Enough written, do not hesitate to visit www.facebook.com/eggsofgomorrh or www.krucyator.com to get your raw slab of bestial War Metal.