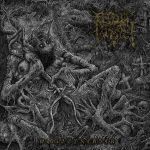 “Wombspreader” is Swiss EGGS OF GOMORRH’s second full-length. I usually stay away from the oddly named “War Metal” (a tag I personally don’t agree with) with a few exceptions, these being BESTIAL WARLUST, BLASPHEMY and BEHERIT. For me these bands fall into the Death / Black category, just like EGGS OF GOMORRH. But in this particular case, the Swiss outfit not only brings a relentless attack, but it also incorporates different aspects that, for me, sets them apart from that “other” crowd. And these aspects are the ones that made me a fan almost immediately after listening to their debut album “Rot Prophet”, as a recommendation from a friend. With “Wombspreader” these guys have upped their game and broadened their sound. Indeed, the savage aggression of the music is still the main feature here, but their songwriting has evolved and the nuances in their first album have become part of their current style. The guitar dissonances, the drum patterns, the interaction between the instruments and the vocal phrasing have become more twisted and complex. And seldom, I find myself trying to figure out all of these things instead of enjoying the sheer savagery that “Wombspreader” offers. I mean, with the longest clocking at 4 minutes, 10 seconds, these guys pack a lot in these 10 songs. But on the contrary of the countless clones that the aforementioned bands have spawned, EGGS OF GOMORRH have crafted interesting songs that twist and turn in more wicked ways than I could have imagined. Performance wise, every instrument is punished down to a pulp. Drummer Alexey hits his drums mercilessly, but also squeezes in lots of varied patterns that, after a few listens, made me pause and rewind, because I was not expecting such a level of detail. Something that I didn’t associate with this style of music before listening to EGGS OF GOMORRH. Guitarist Aamon and bassist Invn churn out some iniquitous and memorable riffs, combining tremolo picking, palm muting and a bit of dissonance. And last, but not least, vocalist B.N.G.V. tops the viciousness of “Wombspreader” with a mix of furious grunts and deep growls, enhancing the songs with lots of creative phrasing. Although the overall sound is thick and dense, the production is impeccable. The mix feels polished and clear, where the instruments never fight one another for space. So yes, you won’t hear any of the murky, indecipherable chaos that many of the current bands playing this style are so proud of, which I personally don’t understand. What is the point of recording good music in the worst possible way? Anyway, luckily that is not the case here. The mastering is a bit too loud for me. A bit of dynamics would make for a more intricate listening experience. But that is just me, an old fart that misses ’90s dynamic range in extreme Metal. EGGS OF GOMORRH has released a bold and interesting album. A beast of an album, dare I say, that not only embraces their main Black and Death Metal influences but also expands their sound into something I am definitely looking forward to already. I urge you to check their official page www.facebook.com/eggsofgomorrh and go get their album as soon as possible from www.facebook.com/godzovwar