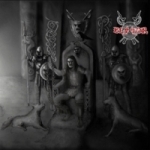 ELFFOR
From The Throne Of Hate
(Northern Silence Productions)
60:23min

J.R.R. Tolkien’s “The Lord of the Rings” is for nearly 80 years a source of inspiration for so many people around the globe. ‘Speak, friend and enter.’ – the words which the company of the nine has to speak before they are allowed to enter the gates of Moria are the perfect introduction to “From The Throne Of Hate” – even if it’s not connected to the Tolkien universe. You enter a own cosmos created by Eöl the sole member of the Spanish band and everybody who grew up with bands like SUMMONING or PAZUZU (like myself) will feel like coming home. ELFFOR has been founded in 1998 as a pure ambient project but changed later to a more symphonic Black Metal direction. Especially songs like ‘Upon The Barbarian Woods’ with strong TROLL influences (“Drep De Kristne”) are showing that the band is really working with the best parts of both worlds. The album has originally been released on a limited basis of 500 underground copies and after listening to the re-release version with two bonus tracks it’s fully understandable why all copies had been sold within weeks. What makes this album (the third re-release of older ELFFOR material) so enjoyable is the wide range of influences (SUMMONING is maybe the strongest but still only one influence) and the ambient parts which are more than just a 10 minutes interludium of blowing wind recorded during a stormy night. “From The Throne Of Hate” deserved for sure a re-release to be available to a wider audience and coming back to Mr.Tolkien is should read for this record ‘Speak friend fast and enter” otherwise you will really miss a great record. www.elffor.com, www.northern-silence.de