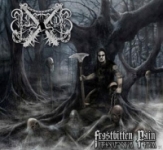 After the successful re-release of nearly the whole ELFFOR back catalogue via Northern Silence I was expecting outpoint number five via this ‘official’ channel but only band member Eöl decided to keep the underground alive by self-releasing “Frostbitten Pain”. So some things will never change due to the fact that all former ELFFOR albums had been also released as strictly limited underground products, but maybe the will to stay independant isn’t surprising for a band heading from the Basque country / Spain. It took quite a while to record “Frostbitten Pain” – to be exact over four years have past since the release of “The Unblessed Woods” – but this release will for sure not disappoint any fan of medieval touched Black Metal. There is no need to deny the fact that ELFFOR are heavily inspired by SUMMONING (they also recorded one track for their tribute album) but this ‘inspiration’ is perfectly transferred into their own interpretation of this style. So from the lyrical point of view no rings & hobbits can be found – just darkness, magic and the more typical Black Metal topics – and the presented songs fully deserve to be called hymns (maybe supported by the fact that they nearly reach the ten minutes barrier). But don’t expect keyboard suffocated music – naturally the music depends on the supporting keys especially to create the medieval touch – but ELFFOR are still a Black Metal act. “Frostbitten Pain” is offering five songs on a high quality level but in some way an ear catcher is missing, this remarkable outstanding track but without doubt is the fifth ELFFOR release nevertheless a good and solid album for all fans of this style. The album is strictly limited to 500 copies and comes in a nice digipak with good cover, so contact the band directly via www.elffor.com, www.myspace.com/elffor