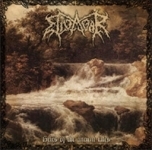 An exact definition of the term Pagan Metal is quite difficult to find these days, the music is raging from dark trolls out of the land of the thousand seas to ulveresque nature Pagan Metal from the United States. ELIVAGAR from Germany is a further Trollzorn band which wants to conquer the Pagan community with their debut album “Heirs Of The Ancient Tales”. The band’s lyrics are in German, old German and English and their music can be roughly described as melodic Death Metal (the AMON AMARTH style) plus violin parts, clear vocals etc. Normally this doesn’t sound too bad, but this album is unfortunately not more than an average release because (so far) the band couldn’t create outstanding songs which keep remembering after at least 4-5 times. A further problem is the “massive” use of the violin which instead of adding more atmosphere to the 14 songs destroying them by repeating nearly the same parts in 3-4 songs. With 5-10 Pagan releases monthly the aim for every newcomer should be to create something unique or to make it better than all bands before otherwise this subgenre will die like the Thrash, Death and Black Metal scene died and resurrected during the last 20-25 years. www.trollzorn.de, www.elivagar-metal.de