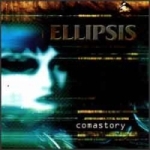 Before inflicting an almost seventy minutes long record onto an unsuspecting audience, you have to be pretty damn sure your music is worth the effort. This kind of question the four musicians of the French band ELLIPSIS didn’t ask to themselves obviously, how much their first full length is uninspiring and dull. Even their label doesn’t know how to tag them properly: they call them a “Psycho-Prog Doom-Metal” band, and I suppose you will agree with me, it means nothing. Well, first let’s cut off the Doom part, because ELLIPSIS have absolutely nothing to do with this musical genre. That leaves us with the “Psycho-Progressive” tag, and if one means by progressive very complex songs with lots of breaks and different moods, let’s forget that also in the ELLIPSIS case. Finally, we are left with the term “Psycho”, meaning that a form of madness could be detected here, be it musically or lyrically wise. I didn’t hear that on “Comastory”, sorry. So in the end, we are left with nothing at all except boring tracks, vaguely connected to straight Heavy Metal and even Hard Rock (due to the -very good- vocals) played with a total absence of intensity and passion. The band privileged mid-paced rhythms, then adding to the tepidness of the music. It is like the ELLIPSIS musicians felt themselves tired of life and totally anemic (or maybe they were comatose?). Only the drummer (Man X) managed to impress me a bit, thanks to his science of syncopated beat, but that is not enough to make up for a full length. The lyrics are no less than an accumulation of clichés of the introspective kind, this sounding very pubescent if you ask me, especially if you consider that the ELLIPSIS dudes seem to take them very seriously, they don’t distance themselves with their bleak and depressing message. The summit of the ridicule is reached with the eighth tracks “Stratège Lugubre” , this being only a spoken part delivered with a distorted voice (the kind you could here on some video-games or bad horror flicks made exclusively for TV). Even the slowest of the Funeral Doom records would fail to express boredom next to this insanely uninteresting disk. Funnily enough, “Comastory” is the exact antithesis of the underrated masterpiece that is “Psychosphere” from German band HOUSE OF SPIRITS: the same source of inspiration, the same musical approach, but not the same composing talent. Because here lies the main failure in the ELLIPSIS camp: even if the musicians are very good, they are unable to come up with exciting and mind daring music. I hate to slag a band like that, but I can’t do otherwise to stay honest with myself. I guess you have got the message: avoid this at any cost.