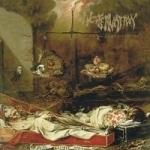 This is a love-it or hate-it thing. Already ENCOFFINATION’s debut “Ritual Ascension Beyond Flesh” (Selfmadegod Records), as well as their 7″ EP “Seventh Temple Of Laodicean Scripture” through Blood Harvest Records taught me that. I’m on the “love it”-side of things, though I have to admit, that ENCOFFINATION is asking for your attention and patience in order to discover their quality. It’s not music to listen to alongside while doing something else; its quality is growing with detailed listening. Actually I listened to it a few times already while driving car and man – this is tough shit. It’d be an easy step to badmouth about this music, as it is far from being the ordinary type of Metal music, no common structures whatsoever. Some might complain that this music is not music at all – which it actually really isn’t, in the general understanding. What you need to figure out, but need to be open for it, is the atmosphere created here. The usually ingredients like matured musicianship, rhythm, playing skills and things like that are of minor importance here and I won’t judge if the musicians involved are geniuses on their instruments, nor do I really care. The fact that those 2 participants recorded this album independent from each other at different places may seem that ENCOFFINATION is just a minor priority project for them – whether that’s the truth or not is nothing I would like to judge either. Seeing this album as an atmospheric monster, ugly to the bone and gloomy as disappearing from our earthly existence makes this to an interesting and intense release in the Death Metal genre. Roughly explained I’d say that the music from ENCOFFINATION is a mix between THERGOTHON (sloooooooooow, dark and gloomy) and INCANTATION (deeeeeep…). Whereas THERGOTHON opened doors for this type of music 20 years ago and I don’t really know many bands still active today which are in a similar corner of this musical direction. Therefore I say that a band like ENCOFFINATION is important in what they are doing. A topnotch release, besides that just perfectly presented in the visual point of view, for those persons, open minded enough to leaving the ordinary musical structures. Available through www.selfmadegod.com.