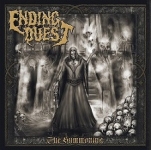 "The Summoning” from Swedish ENDING QUEST is the debut of this in 2009 formed trio(?) from Stockholm. Two members also play in DESOLATOR, namely bass player Jonas Bergkvist and guitarist Stefan Nordström, both also handling vocals. ENDING QUEST already released two demos: "Led To The Slaughter” in 2010 and "Vlad Tepes” in 2011. Well, "The Summoning” is a first acquaintance with the music these gents offer and it turned out that a few more spins didn’t hurt. The production is heavy with every instrument clearly emerging. Besides that, the band go for it and that clearly shows. Musicwise this album may have a hard time getting attention because of the huge amount of similar albums that pay tribute to the pioneering Swedisch heydays and the question is if this one stands out in a style where originality is almost an absurd argument. To tell you the truth, the first spins I found "The Summoning” weak and just another superfluous release that’s nothing more than one dimensiona adoration. Later on it didn’t seem so bad after all. The arrangements like in ‘Sumerian Invocation’, ‘Grotesque Abolishment’ and in ‘The Lament Configuration’ are pretty cool actually. Sure, they are just moments and it’s all a feast of recognition, but where other albums are exposed as incompetent by spiritless and forced riffs don’t convince in any way, the aim here is to retain the tension. Some riffs also fail, but because of their amount it is forgiven. The drummer, whose name I couldn’t find, keeps it tight and brutal and injects some energy with some unexpected fills without compromising the tightness. All in all, "The Summoning” may not be an essential brilliant ground-breaking record, but it turned out to be a pleasant surprise. Fans of RIBSPREADER, SEANCE, AXIS POWERS, INTERMENT, BLOODBATH, GRAVE, FLESHCRAWL and the likes can’t really go wrong with this one. Listen first to decide whether it satisfies your needs. For more info, check www.facebook.com/pages/ending-quest/146404308776819 or www.fda-records.com.