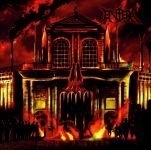 When it comes to iconic Thrash Metal bands from Germany, ENTERA might not make the list of many. So, those who are not aware, will find it remarkable enough that they have been active for over twenty years and defying the mainstream with their unforgiving Thrash sound constructed by a solid discography of three EP and three full length – most notably, all released independently! Founded at the beginning of the 90s, the Thrashers of Nuremberg stayed honest and straight forward in their style and still developing consistently. Recently, ENTERA celebrates its 30th anniversary and released their fourth full length and seventh independent publication till date: “Hate Factory”. Again, they delivered what they are capable of – old school Thrash Metal, which was performed like playing a live concert. This tradition also explains “why the band took their time for the recording!”, possibly only because of wanting to sound as natural as possible. No triggered drums and the guitars and bass were only recorded with microphones to create that certain live feeling. In addition to that trademark straight forwardness, but also playful Thrash, elements from Speed Metal and Death Metal are added into their violent Thrash, combined with technically demanding moments. From a purely musical point of view, MEGADETH can certainly be mentioned here as inspiration, and as far as the clearly grippier, shouted background vocals are concerned, it seems to be bands like ANTHRAX that have been the godfather. NUCLEAR ASSAULT can also be heard as inspiration in the cranky tracks, which can be discovered in phases throughout the record. The bursting aggressiveness of ‘Fake Persons’ or the intricate pace of ‘Getting Old Is Shit’ would stand out the first time you listen to this record, which will make you shake your heads without stopping. Also, the thrilling introduction of ‘War Of The Zombies’, with almost electrified strike like bass lines and the varied and complex technicality of ‘One Week Left’ sound like old school momentums. ‘I Just Can’t Hear It Anymore’, ‘Never Reached Aspirations’ , ‘Pagar Por Pagar’ and ‘Playbak’ are all typical of ENTERA Thrash Metal, characterized by effortless playing with abundance of energy and solid tackling of socially critical topics – the way you like and always seek it as an old school Thrash Metaller. No wonder that this band remains exciting even after almost 30 years and their latest revelation shows the potential that is still dormant in this band. So is their tradition of treating their ever loyal fans; as the record served up a lavish CD-ROM section with lots of live and band photos, video interviews, the video clip for ‘Each Day’ and plenty of other images such as concert posters and flyers – such generosity should serve as an example for all labels out there on specialized re-releases. With an album art depicting the whole essence, “Hate Factory” now available in variable packages, should satisfy each exposed Thrash Metal fanatic and will further strengthen the uncompromising legacy of ENTERA. Explore more about that band at www.entera.org and www.facebook.com/entera-205340632811362