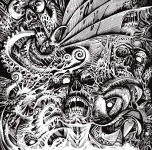 ENTRAPMENT from Groningen in Holland return with their fourth and maybe last album "Imminent Violent Death". As far as I know, the band is only consisting of Michel Jonker now, who celebrates his love for the 90s Death Metal scene from Stockholm. Means the first three tracks are highly influenced by ENTOMBED, DISMEMBER and partly even GRAVE. Michel is not simply copying these bands but the influences of those masters are pretty strong on each of the first three tracks. ‘Malicious Predominance’ has some slight notes of mighty CEMETARY during their "Godless Beauty" period before ‘Sacrilegious Congregation’ returns to worship the godly DISMEMBER. What I really adore is that Michel even can skip his vocals to make them sound like his role models (L.G. and Matti). The titletrack ‘Imminent Violent Death’ has again this touch of warm melodies in the vein of CEMETARY or even DESULTORY before the remaining tracks return with solid but more brutal Death Metal. Definitely Michel is not bringing anything new at all nor he even tries to sound any different to the mentioned bands he worships. But he managed to write some very enjoyable songs with the right length of tracks and album. The production is clear and powerful but still sounding old school and got rounded off by a good cover artwork. It would be sad, if that was really the last album of him as rumors might be telling us. I would appreciate Michel to continue his work and this album definitely is minimum 8 of 10 points, which we never give here. Check out the album on youtube or just check it via one of the following sources: www.facebook.com/entrapmentdeathmetal, www.dawnbreed.com