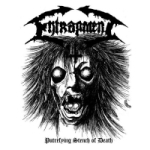 Well, it seems this old school Death Metal revival and Belgium’s Detest Records are taking things quite serious. This time in the form of a 3 song demo-tape with a band from The Netherlands, which seems procreated with Death genes of bands like early DISMEMBER, early ENTOMBED and also come traces of MASTER and REPULSION can be found there. This seems to be a one man project, and so far sound quite convincing. Yes, this is the same old formula some of us have been exposed many times, but at least in this style, things well done are more than welcome, and then originality can really go to a second term… or to hell indeed. This tape gets a quite good production for a demo, and is also a band to look out in future releases. In fact they have another demo which I think was released this same year, so it would not be a bad idea to keep an eye for it. Now I need more. www.myspace.com/entrapmentdeathmetal,  www.detestrecords.com