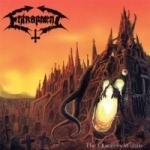 The toxic contagion of old school swedish Death Metal is worldwide and also hit the Dutch borders. Few have fallen prey to the plague like BURNING HATRED and ENTRAPMENT. This last one is no newcomer and released three demos already. “Infernal Blasphemies”, “Putrefying Stench Of Death” (both from 2010) and “Crawling Morbidity” (2011). “Infernal Blasphemies” was released by the cool Detest Records, but the later were put out on own account. In case you missed them, German Godeater Records recently rereleased all three of them on silver under the title “Irreligeous Abominations”. “The Obscurity Within…” is a worthy follow up to the evolvement of the demos. Some older tracks have made it to this album, like the awesome ‘Soul Entrapment’ and ‘Infernal Blasphemies’. The style can be described as a NIHILIST / (old) ENTOMBED worship with some hints of REPULSION and AUTOPSY. This is food for fans of INTERMENT, BASTARD PRIEST and to sum an immense list up; every significant band from the D-Beat Swedeath hall of fame. In almost every track there’s something familiar. That’s not a problem at all. For instance, ‘Infernal Blasphemies’ reminded me of NIRVANA 2002’s ‘Slumber’ because of the way the vocals set in. ‘Dead And Cold’ has some similarities with ‘Foetal Carnage’ from GOREFEST. I could name a few more examples, but I leave that for you. It’s more a feast of recognition with enough cool riffs and rawness to stay exciting from start to finish. OK, some riffs seem to overlap in different tracks, but who cares. To wrap it up, this is (one of) the coolest record(s) from the Netherlands this year. Be sure to check this one out! For more info, go to www.facebook.com/pages/entrapment/171603089577707, www.soulsellerrecords.com