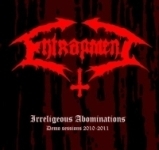 I’m totally into those kind of demo compilation CDs, this is a great thing to present a band’s early material to a wider audience. Especially if that early material is already that cool like it is in this case. ENTRAPMENT is a one man project from Groningen (The Netherlands) and although I’m not a friend of one man ‘bands’ Michel Jonker (vocals and all instruments) did a good job. He delivers very raw Punk influenced old school Death Metal. Nothing too spectacular but very entertaining. There are some AUTOPSY influences and some strong early ENTOMBED / NIHILIST vibes and especially the D-Beat creates an old-fashioned Swedish atmosphere. But that doesn’t mean that ENTRAPMENT sounds like one of those ENTOMBED / DISMEMBER clones. They do not. Well, I have to admit that for my personal taste ENTRAPMENT sometimes sounds too punkish. But hey, I’m just a stubborn old Metalhead. So don’t care about that. If you are into well played and raw produced Death Metal like it was played in the heydays of Death Metal this album is definitely worth your attention. "Irreligeous Abominations" is a compilation of the entire recordings ENTRAPMENT did so far including the "Infernal Blasphemies" and the "Putrefying Stench Of Death" demo sessions (both from 2010) and the "Crawling Morbidity" 7" EP (from 2011). Also included are seven live songs recorded in Hoogeveen, January 2012, which have a very dynamic, powerful and rather good sound. Okay, let’s come to an end: if you are not looking for the most original next big thing but for some more than solid ass kicking rotten Death Metal from the grave you should get your fingers on this as soon as possible. I’m really looking forward to their debut full-length. More info at www.facebook.com/pages/entrapment/171603089577707, www.entrapment2.bandcamp.com, www.facebook.com/godeaterrec