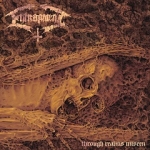 The very beginning of the new ENTRAPMENT album surprised me a bit as it even sounded like old Swedish melodic Death Metal. And as ‘Omission’ progressed the experimental feel to it all quickly descended upon me. Sure, it’s Death Metal, but probing into unusual paths, with weird guitar distortions and unexpected vibes. I was reminded of the very earliest derivations of bands like TIAMAT (even the vocals sound similar at times) and CEMETARY, that would later take these bands to quite disconcerting and even musically regrettable paths. I am sometimes a bit divided about some of the experiments present here, but I choose not to expect extreme deviations into the realm of Goth for the future and so I concentrate on the praiseworthy attitude of searching for a personal sound in an oversaturated milieu. Gone are the days of pure Swedish Death Metal imitation, although the paternity remains obvious. There is much to be thrilled about, often there are moments of utter brilliance, such as in the amazing ‘Ruination’. And even the experimentation sounds old school, although not exactly in a jazzy way. This is no CYNIC imitation, like so many bands tried and failed to do (most notably PESTILENCE). It is instead an attempt to do the old things in different ways. You start listening to, say ‘Dominant Paradigm’, and it’s sounding a bit odd, and then as the song goes on you get these “what the fuck is he doing” moments, but it still sounds good, and heavy. Usually mid-tempo, the music sometimes goes slower, melodic (listen to that PARADISE LOST like entrance at ‘Withering Souls’ or the CATHEDRAL like ending in ‘Discordant Response’), and sometimes a bit faster and heavier or even Crust Punk in ‘Isolated Condemnation’. It takes some bravery to do something like this, as it can fail in several ways. I enjoy that Michel takes the risk and gives me work to chew a bit on other than just having me think “this is a Death Metal album that sounds like ENTOMBED meets AUTOPSY”. There’s quite a bit to listen to here, and on the whole I was more often pleased than puzzled. If you think this will be your cup of tea, go check them out at www.facebook.com/pages/entrapment/171603089577707, www.facebook.com/pulverisedrecords