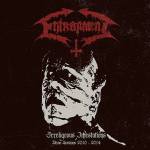 By the time the Dutch Death Metal band ENTRAPMENT is releasing its third full-length album, The Crawling Chaos Records together with Godeater Records deliver this compilation of the less readily available material, some even previously unreleased, taken from demos, session recordings and split EPs (this is pretty much a re-release of the "Irreligeous Abominations – Demo Sessions 2010-2011" compilation, with the only difference that the 7 live tracks of the original release have been replaced by an AUTHORIZED cover, from the unreleased split EP with NECROWRETCH, and the band’s contributions to the split EPs with MASSIVE ASSAULT and PYRE – Frank). ENTRAPMENT is actually a one-man band, the creation of Michel Jonker, who relies on live members to play gigs. The sound is clearly affiliated to the most brutal side of Swedish Death Metal, namely bands like CARNAGE and ENTOMBED (the latter even present in a cover version from their NIHILIST times and so credited). Everything takes the listener back to the old days of underground Death Metal, and as one begins to listen to the opening debut demo one wonders how they managed to get so dirty and yet so appropriate a production in 2010. You might believe it, should someone tell you this was a lost NIHILIST demo from 1988 / ’89. The instruments sound exactly like back in those days (amazing replication of the guitar sound), and it must have been a painstaking process to get this close to the original thing. Surprisingly, the follow-up demo manages to sound even more underproduced; it’s almost a rehearsal recording. This general primitive feeling is present to a greater or lesser extent in pretty much all of the material in this CD. Still, there is an undeniable quality to the composition, with lethal riffs and an effective capture of the teenage rage that seethed from the death-impregnated tracks of the genre’s infancy. Over two decades past and bearing this in mind, you can wonder whether it wouldn’t make more sense to skip the copycats and go to the source stuff, but the truth is, for those longing for the erstwhile years of the Death Metal we love, this material is so good it is most definitely worth your time. Mainly the songs from the "Crawling Morbidity" EP have a much better production, but not to the detriment of the listening experience. Everything always sounds brutal, underground, intense and deathly. Also, later material has more personality, moving away just a bit from the shadow of the aforementioned bands, but still very deeply rooted in old school Death Metal. I am sure very few of the younger bands are able of invoking the spirit of the past this way and with such strong material. So learn more about ENTRAPMENT at www.facebook.com/pages/entrapment/171603089577707, http://entrapment2.bandcamp.com, www.thecrawlingchaos-records.de