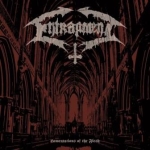 In times when the old school Death Metal genre is already shitloaded with bands acting in a similar way it’s getting more and more important for even long running artists to get a more individual and characteristic style instead of doing the tribute thing. Dutch ENTRAPMENT did it the right way on their second longplayer. “Lamentations Of The Flesh” is absolutely the best stuff I’ve heard of this Groningen based band so far. Of course you still hear and reek the addiction of their main songwriter for old AUTOPSY, NIHILIST, early MASTER, early DEATH etc., but these new tunes have a lot more to offer, especially a lot more diversity and most of all catchiness. Compared to their previous stuff new songs like ‘Proclamation’, ‘Unearthly Cries’ or ‘The Faithless’ sound a lot more gloomy and dark. More in-depth melody work in the vein of early PARADISE LOST or VALLENFYRE style has been embedded successfully. The arrangements got a lot more varied with room for discovery with each spinning of the album. Of course the aggression level is still there and on some parts this album reminds me a lot of the “On The Wings Of Inferno” era from ASPHYX, especially the vocals have a little Wannes Gubbels touch. Productionwise I also think that there are parallels to that ASPHYX album in particular; you have a lot of upfronted saw like guitars instead of bass ridden boost. There have been some problems with the first coverartwork, so there was a last minute change. Personally I think that their first cover suggestion would have fit much better, but this doesn’t affect the music itself! “Lamentations Of The Flesh” is a major step in the right direction for ENTRAPMENT and for sure one of the surpise underground Death Metal releases popping up in these first months of 2014! Absolutely an album with a long running entertainment effect if you like your Death Metal the way as mentioned above!!! Support!!! Available as a digipak CD or gatefold LP. For all further information check out www.facebook.com/pages/entrapment/171603089577707, http://entrapment2.bandcamp.com, www.soulsellerrecords.com