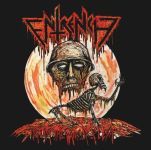 ENTRENCH
Through The Walls Of Flesh
(I Hate Records)
37:29min

These savage Swedes unleash a devastating and blistering Death / Thrash assault upon the senses on this their 3rd album. They plough the same vicious musical furrow as fellow Swedes MERCILESS and HYPNOSIA, possessing the same perfect balance between the all out brutality and heaviness of Death Metal and the raging aggression of Thrash and what you get from this mixing of genres is an explosive and energetic sounding hatefilled hybrid which will grab you by the throat and won’t let go until they have finished this bruising aural assault. Vocally it’s a screamed affair, and once again the aforementioned MERCILESS and HYPNOSIA instantly spring to mind, harsh throat shredding screams leading the aural onslaught which bear an uncanny resemblance to MERCILESS frontman Rogga Petterson’s scathing vocal style. The production is powerful but not polished and has a raw edge to it with each instrument cutting through the mix just right and tempo wise it’s a mostly fast paced double kick driven affair, but they do slow things down from time to time before launching back into a relentless pounding uptempo Thrash attack. With MERCILESS soon to finally call it a day for good, ENTRENCH are poised to usurp the throne of Swedish Death / Thrash and this album is sure to garner them a larger following. Ferocious and fierce. More info at: www.facebook.com/entrench, www.ihate.se