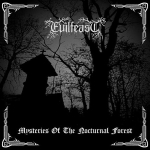 EVILFEAST… For years I’ve wondered what an evil feast actually is. Maybe it’s not for me to know. What I DO know is this… Poland’s one-man band from the mind and talent of GrimSpirit introduced his first album into the world in 2004 with "Mysteries Of The Nocturnal Forest". With the title alone, you sort of have a good idea what it’ll sound like… very raw and quite atmospheric in its scope. Since then, EVILFEAST has gradually worked its way up the Black Metal ladder to achieve memorability in the masses. But it all began with this album. ‘Ode To A Rising Fullmoon’ opens the album with an ambient, sinister keyboard track that morphs into the icy, murky, lo-fi ‘Immerse Into Cold Mist’. The track, hell the entire album, has that classic Black Metal feel to it. You can almost imagine traipsing through the snowy woods while a shadowy creature lurks in the distance. ‘Thy Woods Are Sacred’ nails in my point above with mesmerizing guitars, distant drums way down in the mix and despairing vocals. With a title such as ‘Towards The Funeral Winternight Landscape’, GrimSpirit creates a tantalizing aural picture that resonates beauty and eeriness at the same time. ‘Solitude Apotheosis’ is an ambient segue into ‘Descending Winds Of Holocaust’, a symphonic wall of sound that ushers in the night until the song kicks in with an aggressive rhythm and words about a black forest. ‘The Black Heavens Open’ is a mid-tempo track that evolves as it goes along, gently whispering and caressing the listener before exploding into a furious blast of total angst. ‘Morbid Rejoice’ is another fast-paced track, while ‘Desolate Fields Left’ wraps up the album in another ambient soundscape. Though there was a demo before it, this album introduced the world to a band (though only one man) that would have staying power in the genre, and who continues to create impressive work to this day. For more info, check out www.facebook.com/evilfeast-148139598691735, www.eisenton.de