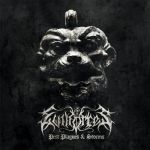 This is the debut album of this one man band / project from Mexico, that has actually converted into a live band with the help of various musicians from other bands like MAJESTIC DOWNFALL and DODSFALL. The style this band plays is that of evil Black Metal, which has its roots in the Norwegian Black Metal school from the early 90s, where names like ENSLAVED, BURZUM and DARKTHRONE shine in the influences here. But instead of choosing a raw production, they went with a very good and powerful sound. Mixed within all this Black Metal sounds one can also find references to old school Death Metal and even some Heavy Metal touches. But make no mistake, this is Black Metal all the way. I find this band with many similarities to early MARDUK and that fits quite fine with the overall aura of this album. Although the band plays mainly in the faster zone of Metal, they are no strangers to changing tempos, and the subtle uses of atmospheres here and there. Sometimes they do have the more old school Death Metal sound, reminding of EDGE OF SANITY, which makes this album very interesting compared to other bands that took the same 90s Black Metal as their essence. And it’s the kind of album that you find new things in every time you listen to it as it was crafted with many details that shine on in the composition area. Maybe the vocals tend to have a very similar tone on all the songs and that is an area where they can improve things, but now that this project seems to be going into a full band, things can only change for the better. This album is also available as an American edition, so for those looking for quality and creative Black Metal with old school Death Metal sounds, need to get this one before your spirit is destroyed. www.facebook.com/evilforcesofficial, www.satanath.com/sodp