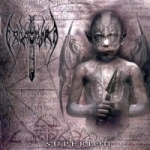 An American band on a Polish label, I expected something special here and I got just that fortunately. This four piece is dedicated to blasphemous Death Metal and they play it by the book, so don’t expect originality and musical experiments here. But the result is devastating enough to make “Superion” a top-priority purchase because you can’t get purer Death Metal these days really. EXCOMMUNION stand right between MORBID ANGEL and INCANTATION, borrowing from the former their twisted song structures and from the latter their semi-doomy parts and their somewhat primitive (read: very spontaneous) approach of the Death Metal genre. The three first tracks reminds me of the ‘Blessed Are The Sick’ track by MORBID ANGEL a lot and it is very rare these days to found out precisely such kind of similarity. The pace is speeded up from the fourth track on, so the album is somewhat divided in two in that regard, with six tracks in total on offer. The production is ok I guess for this kind of release, don’t expect a too much polished one especially in the drum department, the snare drums is tuned high and there is a little echo on it, highlighting then the chaotic playing of drummer Dustin Selveen and consequently the hellish atmosphere of the whole album. The guitars are a little buried in the mix, but that gives a little extra authenticity to the music and brings back good memories of great releases of the dark past, while the vocals express blasphemes and imprecations in a very convincing way, surely one of the best point concerning “Superion”. And if you buy an album only considering its cover, be sure the excellency and beauty of the layout painted by Jacek Wisniewski perfectly reflects the greatness of the EXCOMMUNION music. So you can spend your hard-earned money without a second thought on this one, you will do yourselves a favor doing just that. MASSIVE!